Double Concerto for Cello and Viola performed in Ottawa

#MalcolmForsyth‘s Double Concerto for Cello and Viola, was performed by cellist @Amanda.Forsyth and violist #JethroMarks with the National Arts Centre Orchestra, conducted by #PinchasZukerman, March 6 & 7/14.
This performance was wonderful. The rapport between the soloists was excellent. There are two cadenzi and the glorious interplay between Amanda and Jethro was exquisite. The middle movement, the Adagio Cantabile was delightful. Very enjoyable 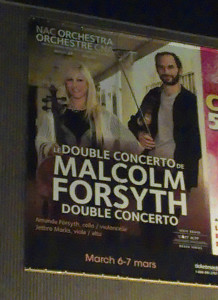 .
The performance was being filmed and a short clip will be included in an upcoming documentary about Malcolm Forsyth, being created by the award-winning film maker, #TheresaWynnyk, of the Company of Women on the Screen, film company.
Theresa won Best Animated Short at the Edmonton Film Festival in 2012, for her film created to accompany the live performance of Malcolm Forsyth’s violin concerto, Trickster Coyote – Lightening Elk. This can be watched at this link:
http://www.youtube.com/watch?v=UyYtRfkXGGE
This uses the unique and beautiful art work of #MaxineNoel

For more information on Amanda Forsyth or to contact her directly, please visit www.amandaforsyth.com .